Last week Cory and I were both off work, so we decided this was a great opportunity to try our own lazy variation of the 3-day potty training boot camp thingy that I've been reading about online. We started the day after Christmas, and at the risk of sounding overly philosophical, potty training has been as much of a growth opportunity for me as it has been for Ivy.

For months, Ivy has been going potty in her little potty chair in her room every morning when she wakes up. It's part of the routine. She also goes right before bed. So the potty-chair introduction has been done and dusted for quite awhile. Ivy's also been dry most days when she wakes up from her nap (at least when she's at home for naps - not sure about daycare), and sometimes in the mornings as well; and in the evenings she sometimes plays in her room with no pants on and will go potty without prompting, so I knew the timing was probably OK. We just had to get her to realize that her urge to go potty means she has to take action, rather than playing right through it and relying on diapers. And my biggest goal was to get her to the point where she would recognize the urge and ask for help at the very least, since her daycare provider isn't keen on forcing the kids to sit on the potty but is happy to help them if they are at the point where they ask for help.

Day 1
Five successes, four accidents. We started the day off in diapers so that Ivy could go to Linus' vet checkup with me. She woke up from her nap dry, and even initiated her pre-nap potty in the potty. Off to a decent start, not much drama, but I was slightly disappointed that it didn't immediately "click" and I had to remind myself that it was only the first day and she still had more successes than accidents.

Day 2
Five successes, three accidents. The accidents happened in her high chair, in the bathtub, and once in the evening when she realized she had to go potty at the same time that she went potty. I started trolling blog posts about potty training and saw that someone had mentioned if toddlers were only going potty once every few hours, it wasn't really going to click with them. I made a mental note to try to get more liquid into her the next day.

Day 3
Eight successes, six accidents. Cory ran to the store in the morning and grabbed some juice, so I started giving Ivy more to drink. Of course, that threw off my timing of taking Ivy potty every two hours, so she had four accidents in a row at dinnertime (in her high chair) and afterwards. Made a mental note to have her sit on the potty before meals. This day was also my most frustrated day; I felt like we were running out of time and I was doing a bad job. If I had an inkling that she might have to go, I made a huge deal out of it, which seemed to throw her off, and she seemed to be more interested in it all if Cory was taking her into the bathroom.

Day 4
Eleven successes, two accidents, and once she started going in her pants and finished in the potty. Another accident during dinner, even though I'd taken her to the potty beforehand. In the morning, she took her baby doll into the bathroom and had it go potty and she gave it pretend M&Ms when it "went." I was happy to see a little more interest in the potty. We watched a movie, during which I gave her a big cup full of hot cocoa, hoping she would have a few more chances to try before bed. And then she had a streak of five potties in the potty, two of which while I was out of the room! And one of those was poop! Wahoo! I was cautiously optimistic that we were off to the races.

Day 5
Eleven successes, two accidents. In the morning she told me "don't come, mommy" and went into the bathroom by herself. Her first accident was when we were outside taking the Christmas lights off of the house. By evening, I started worrying that I was reminding her too often and she was emptying her bladder before it was full and she wasn't getting the urge. I resolved to remind her less the next day, but she has zero tells when she has to go, she just goes. Just two days left before daycare starts up again, and I started to think that this wasn't going to work.

Day 7
8 successes, 3 accidents and one pants-potty combo. This was a hard day because we went to a neighboring city (an hour away) for a 5k race and were out for almost six hours. I put her in disposable pull-ups for the trip and she made use of them on the way up. But on the way home she asked to go in her little travel potty. In the evening she instigated three successful trips in a row!

Day 8
The day it all fell apart. Ivy went back to daycare and, while they reminded her several times about the potty, she refused to take time out of her morning playtime and ended up leaving wet sock prints on the floor when she had an accident, so into a disposable pull-up she went. When we got home, I put her into underwear again but she ended up having probably three accidents during the short evening. How disappointing. Her whole tone about it changed, too: she started talking about not wanting to potty in the potty, and how she'd rather just potty in a diaper. Booooo.

From Here...
Last night I ordered a few cloth pull-ups to try. We have a bag of hand-me-down disposable pull-ups, which she's using in the meantime, but I'm sure they don't make her feel wet. I do, however, like her ability to practice pulling down her own pants if she does have a desire to potty in the potty; so hopefully the cloth trainers will do the trick. And we will just settle in for the long haul, I guess. My plan is to send her to daycare with her cloth pull-ups, and concentrate on evening and weekend home-potty training, and once it clicks for her at home I'm hoping it won't be a stretch for her at daycare.

I've been beating myself up a bit, unsure of whether I was pushing too hard or misreading her readiness cues. In the end, I'm glad we had a week to introduce her to more intensive potty training, and it has been nice not having to wash diapers every other day. She will eventually get it, of course, and in the meantime I'm trying to learn that it's OK to fly blind and learn as I go.
Posted by Megan at 6:43 PM

An infertility-blog-turned-mommy-blog: the story of a longer-than-usual road to building a family. 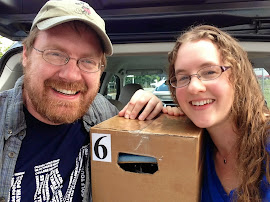 Our IF History at a Glance